In the spring of 2018, the Site Quality Assessor at Falcon Foodservice Equipment set out to determine the scope for energy efficiency improvements on the lighting at their factory in Stirling.

A number of weeklong surveys were performed between 22nd March & 31st May 2018, using their Profile Portable Energy Recorder in an effort to determine the current electricity consumption of lighting in each area.

The Profile was installed in turn at the electrical distribution board of each of the 7 areas of interest:

For each survey, the Profile was configured to record energy use data into 30 minute periods.

After each survey, the ProPower 2 software was used to report and chart the energy use on each lighting circuit. 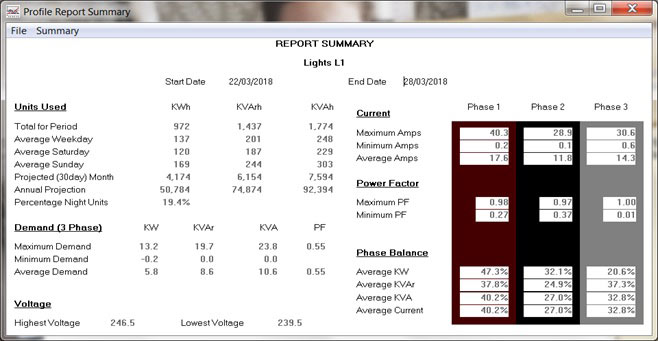 The data was extrapolated to provide a projected monthly energy use for each area, and to calculate the high users:

One thing stood out immediately when viewing the survey charts for the two emergency lighting supplies: 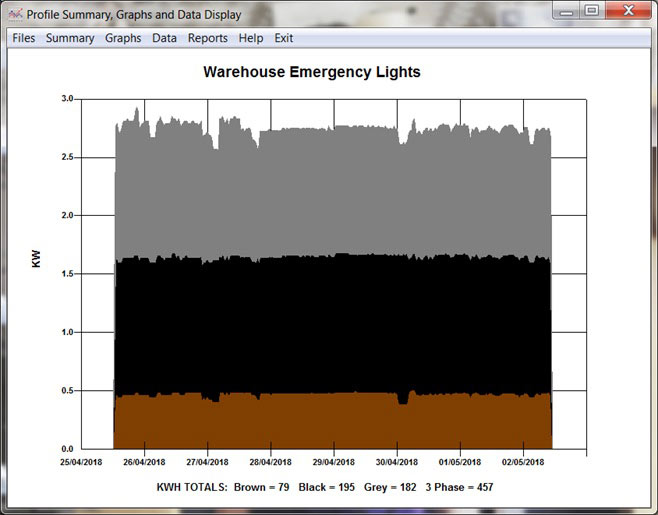 Both sets of emergency lights were found to be running all day, every day throughout the survey periods, with the Emergency lights accounting for 25.38% of the total light energy usage.

Hence one of the conclusions of the exercise was to investigate further if any savings could be made in this area, perhaps bringing the emergency lights under the control of the existing light control panel to work in line with current shift pattern.

The potential saving of this was calculated to be around 50 % off the current emergency light usage, amounting to an annual saving of £2687. It would involve adjustment of 141 fittings, with a rewiring time 30 minutes per fitting for a total of 70 hours work approximately, giving a financial payback of less than 1 year.

Based on this relatively simple survey of lighting practices using the Profile Portable Energy Recorder, an ongoing annual saving of over £5200 was identified.